How might we develop a smart system that helps consumers efficiently manage their food consumption?

On a team with two other interaction designers, I led the voice design of the prototype. I also created the concept video and branding guidelines.

Rye, a Skill for the Amazon Echo Show, prevents food from being forgotten or thrown away by recommending recipes based on the most efficient use of your inventory. 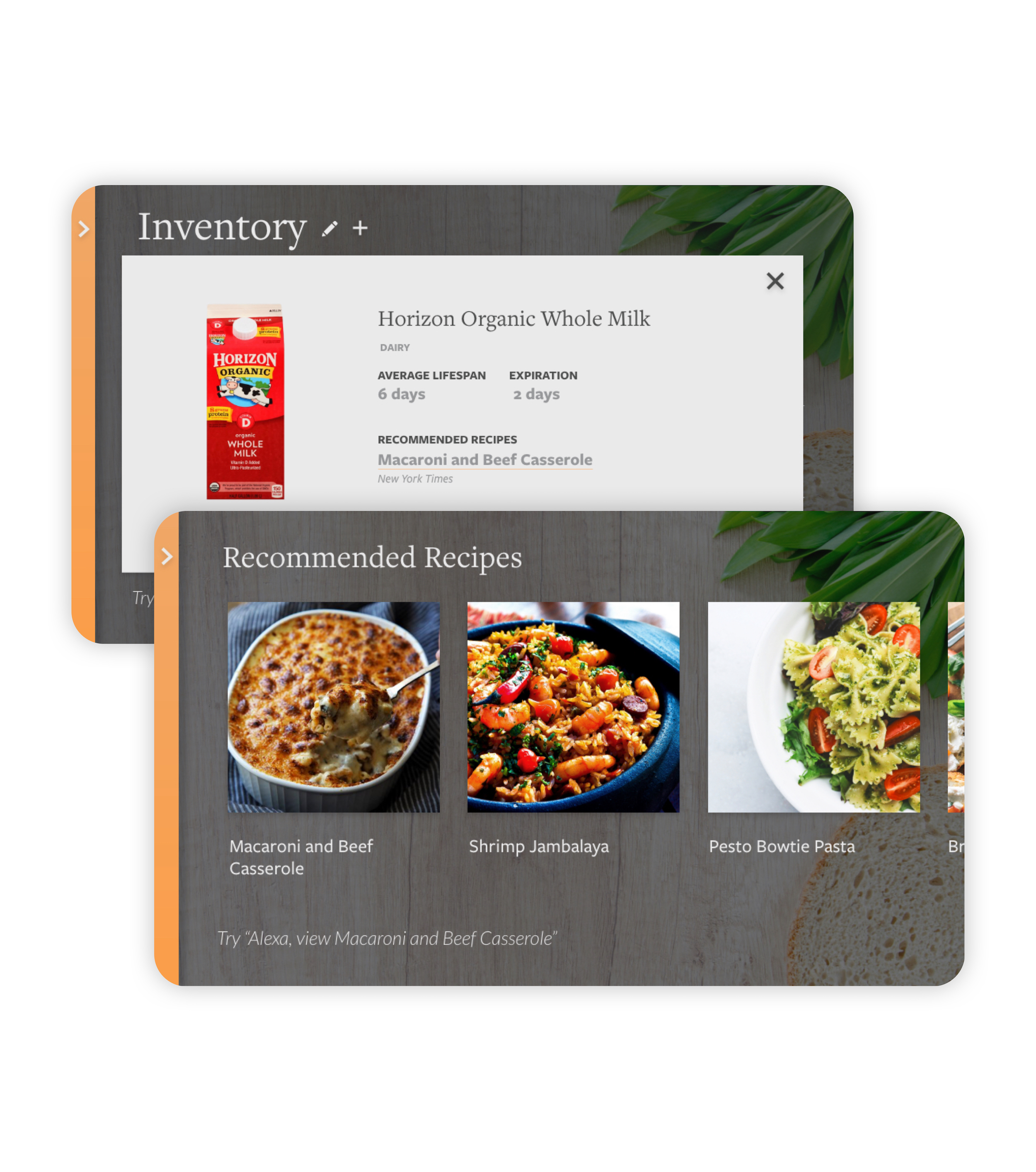 People often have trouble managing their personal food consumption and this leads to forgotten, spoiled food that eventually becomes waste. Despite these wasteful habits, there is not a widely-used, or effective solution to tackle food waste at the consumer level.

30-40% of food in the United States goes uneaten, ending up in landfills where it contributes to greenhouse gases.
——    food waste prevention & recovery assessment report

In most American cities, waste at the consumer level is sorted into three categories: landfill, recycle, and compost. We questioned what was being discarded and saw compost as an opportunity space to explore, especially in the area of expiring food.

Rye connects to your Amazon account and creates a virtual food pantry from your Amazon and Whole Foods purchases. Rye uses your food preferences along with the estimated expiration dates of your foods to optimally manage your consumption and inventory.
‍
Rye addresses wasteful food habits by not changing the way people purchase food, but rather how they use the foods they purchased.

In order to understand people’s food waste behaviors and current community efforts, we dove into secondary research and made three assumptions about unwanted food.

We staged an in-city intervention to test our assumptions about exchanging expiring foods. Inspired by the lending library, we created a neighborhood food pantry out of a bookshelf and an assortment of cooked, uncooked, opened, and unopened foods. We placed the neighborhood food pantry in various locations within the Greater Seattle Area. For each location, most people stopped and examined the bookshelf, but only a few people actually took food.
‍
When interviewing people who stopped or interacted with our prototype, we quickly realized that a consumer to consumer food network did not fit with most people’s mental model. Instead of a food sharing network, most people saw the neighborhood food pantry as another form of food donation for the needy. 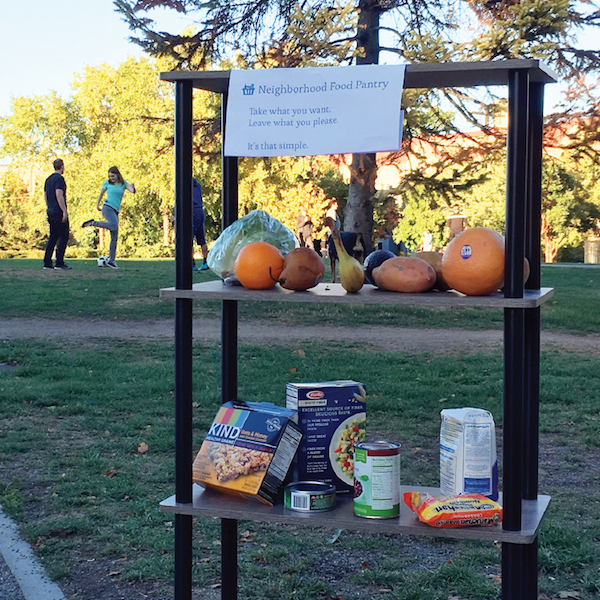 I actually would lilke to take something, but I have the means to afford what I need.
——    in-city intervention participant

Our initial assumptions were challenged, but this allowed us to see further potential in our opportunity space. Taking what we learned from the in-city intervention, we ideated different ideas and created a response suite of 30 concepts.
‍
For our ideation activity, we each wrote down pairs of words associated with food and drew random pairs. With the pairs, we created a 2X2 matrix where we each sketched 10 concepts that fell into the one of the four quadrants.
‍
I received the word pairs: fresh/expiring and community/ individual. These pairs were constraints that allowed me to explore a breadth of ideas. Some examples included augmented reality cooking classes to smart countertops to personal assistants. 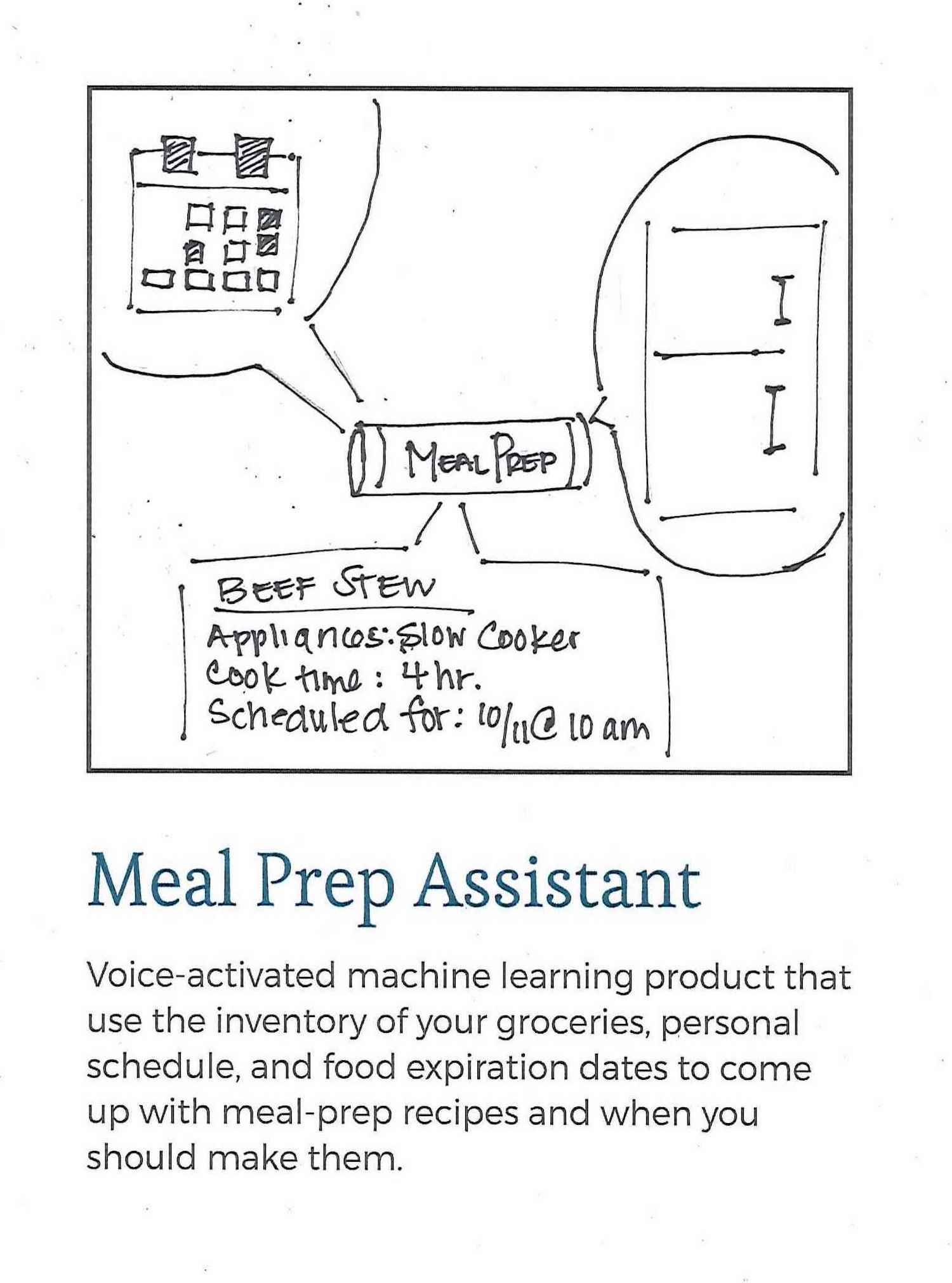 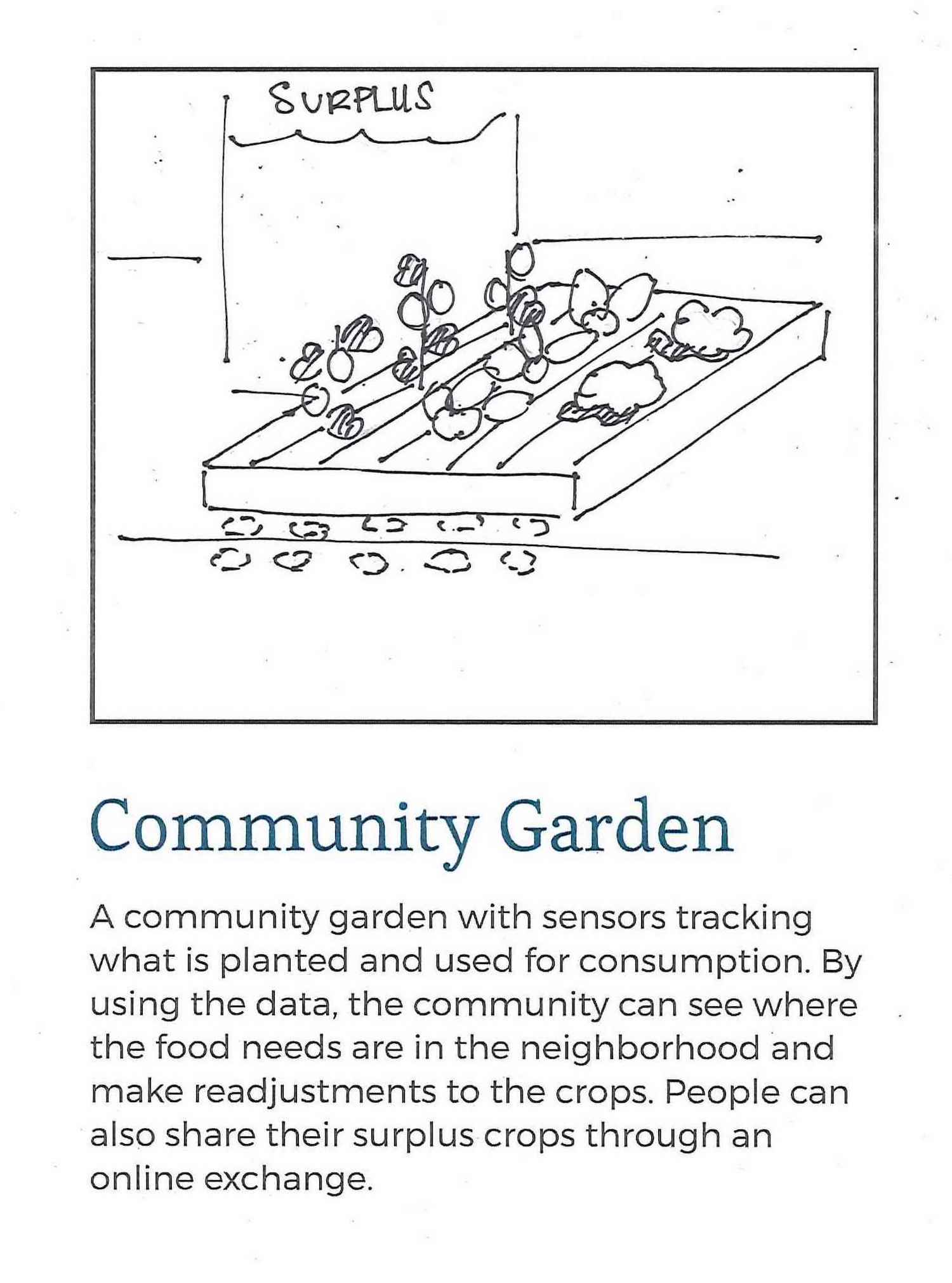 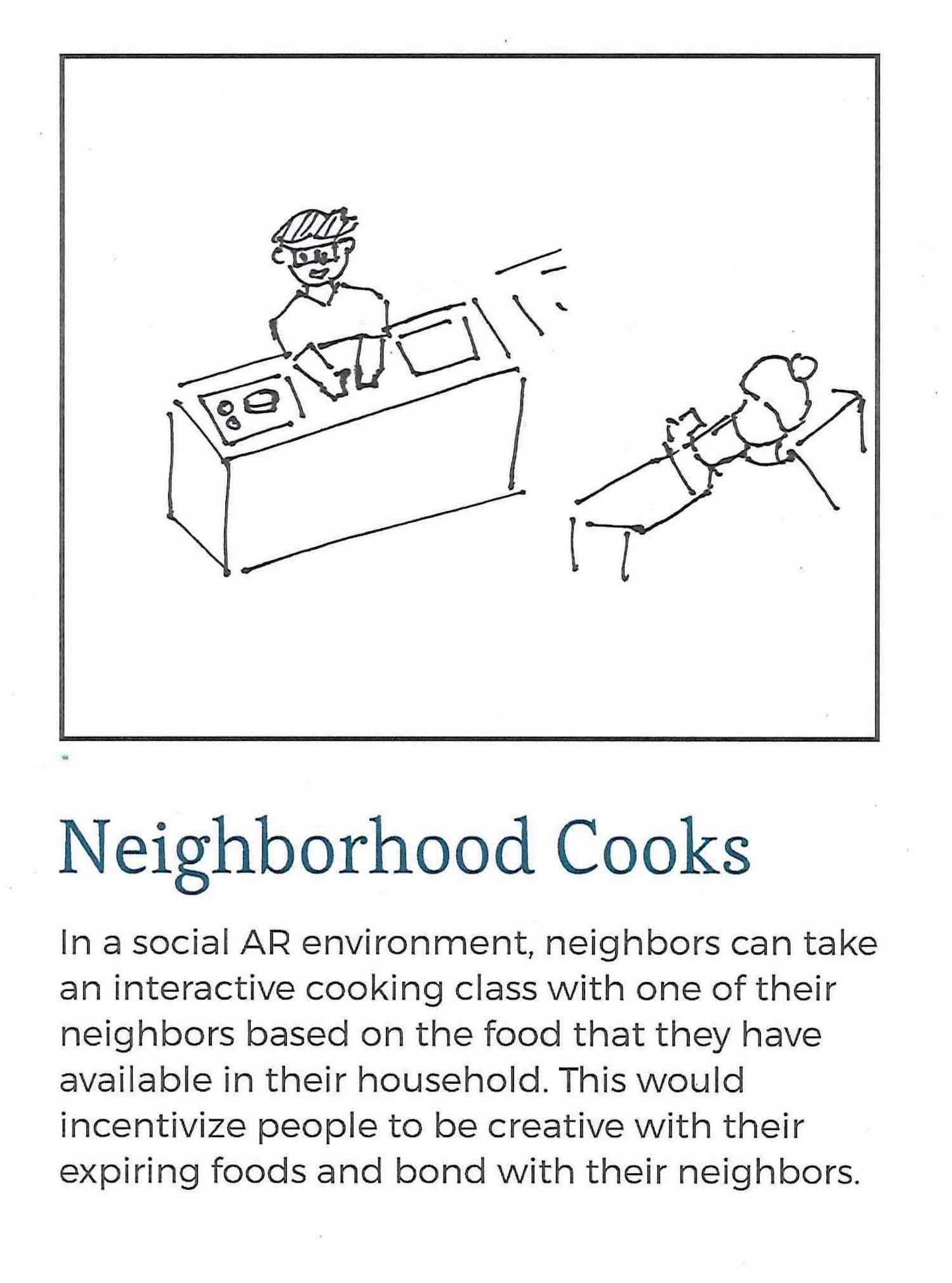 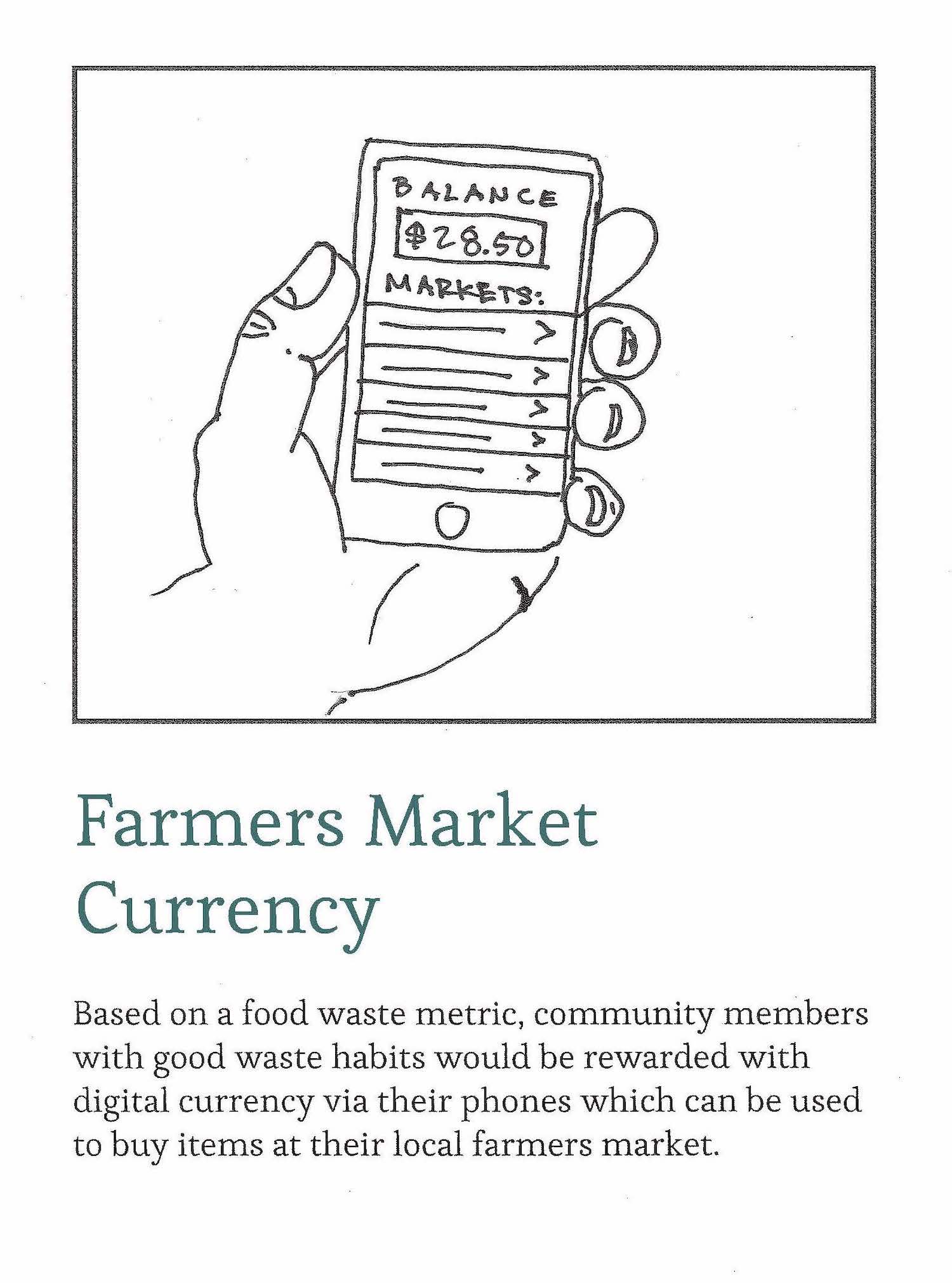 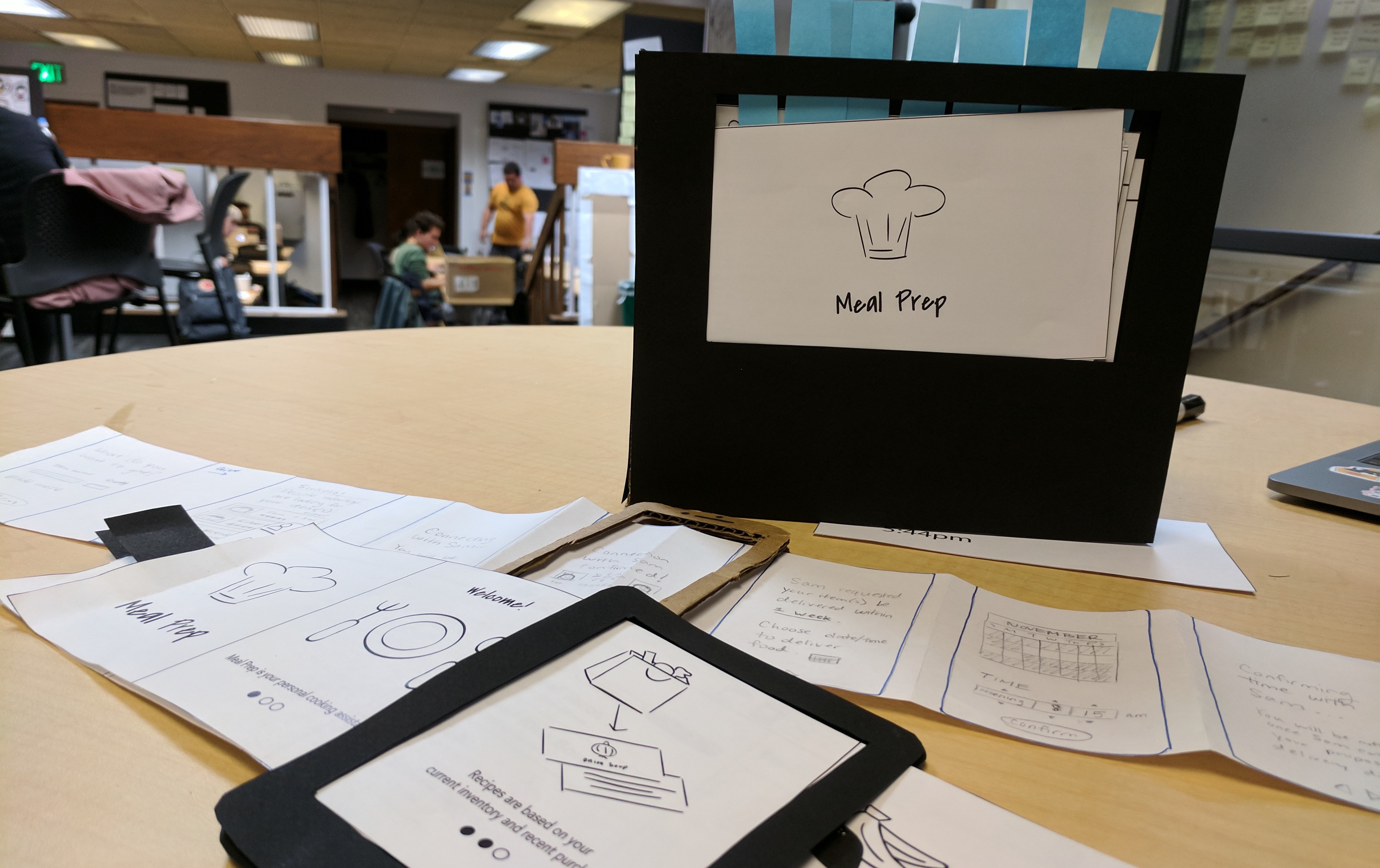 We tested our three paper prototypes with six users  and asked each participant to think aloud as they completed their assigned tasks.

At the beginning of each test, we asked the user to describe their current behavior around food waste. All six users mentioned that they would often waste food and felt “bad” or “guilty” about it, but they didn’t know what else to do with expiring foods.

From our user interviews, two observations that resonated with us because it focused on changeable behavior. We decided to pivot from a food sharing network to a food management system.

I wish there was something else I can do, but what do I do with
'bad' food?
——    research participant

People felt apologetic when they wasted foods and desired a solution that required minimal effort.

Didn't want to pass on the 'burden'

People preferred to make efficient use of their food before it expires rather than giving it away.

Why a Voice User Interface (VUI)?

During our initial round of user testing, more than half of our participants were drawn to Meal Prep because of the hands-free cooking experience. Participants felt that the interactiveness of the device would help them manage their food waste better because it held them accountable for their food inventory. Because of this feedback, we decided to pursue a VUI for our final concept. 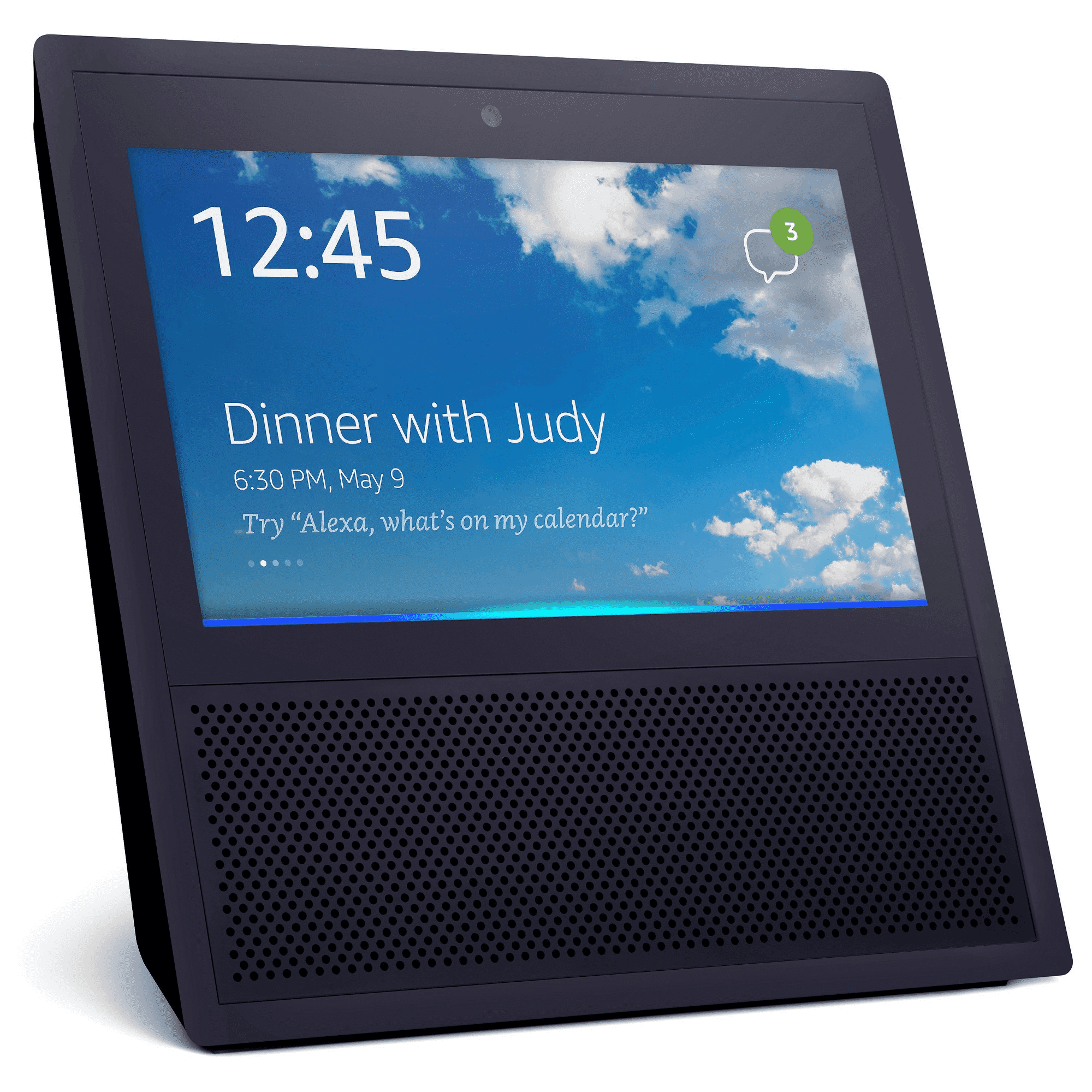 Why an Echo Show?

During concept testing we noticed several times that a person would ask  “Alexa” to repeat a direction or phrase. To address this cognitive overload, especially in a kitchen environment where multitasking and interruptions can be common, we decided that a visual aid is needed.

Before we designed the screen we needed to understand the end-to-end experience of Rye. So, we created interaction flows for three user scenarios that addressed potential gaps; from onboarding to substituting an ingredient during a recipe. 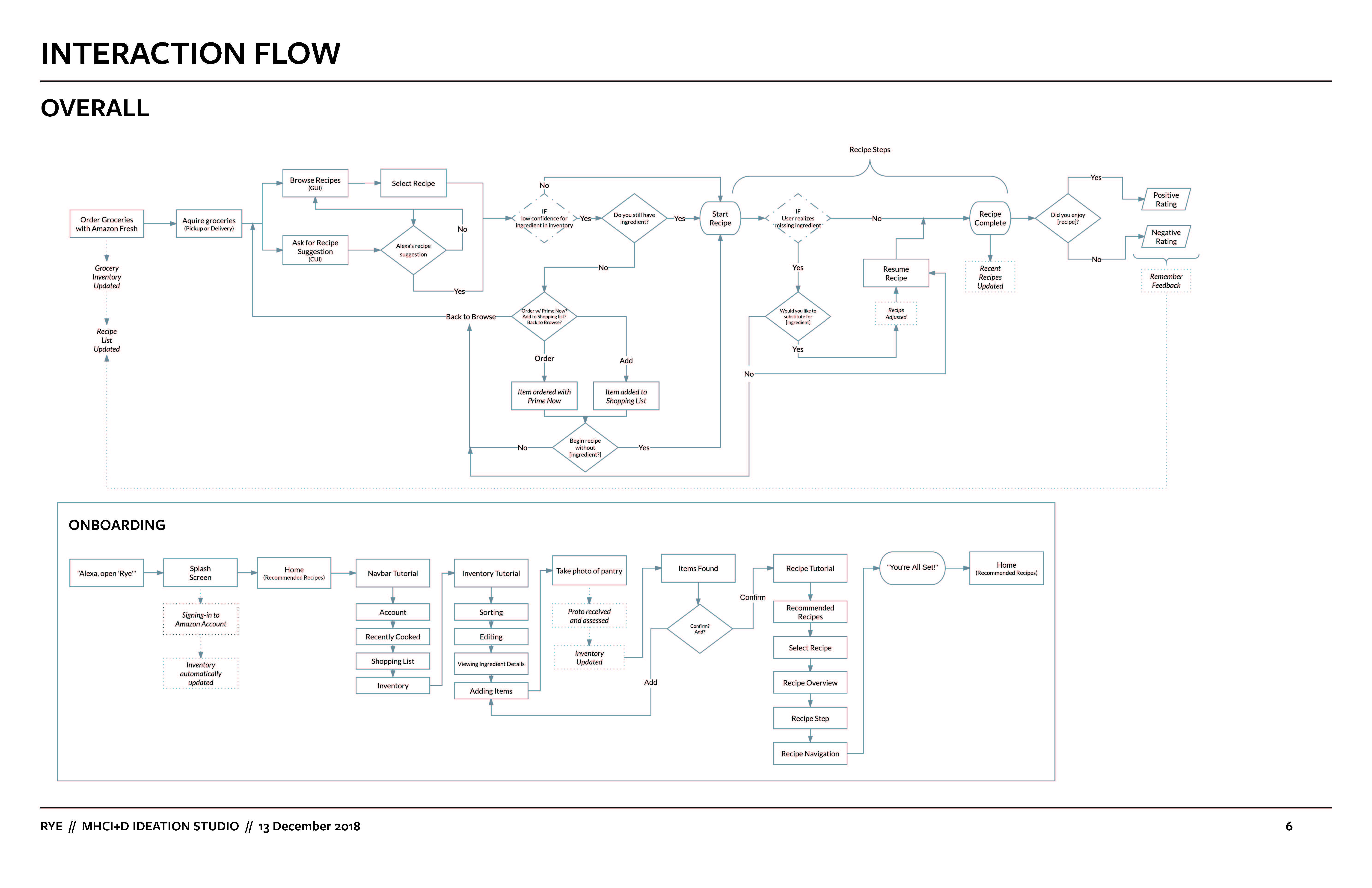 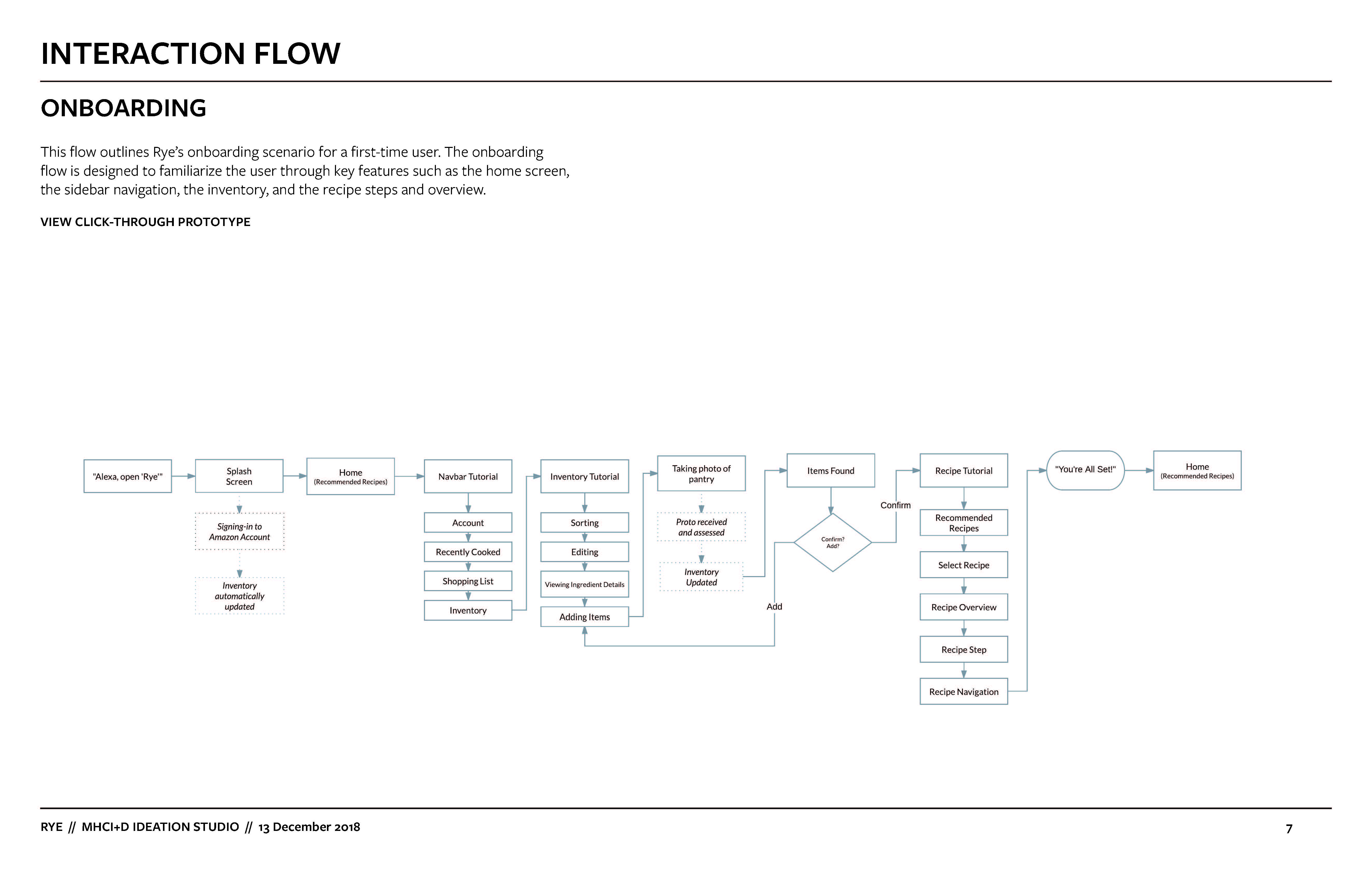 This flow outlines Rye’s onboarding scenario and highlights key features such as the inventory and recommended recipes. 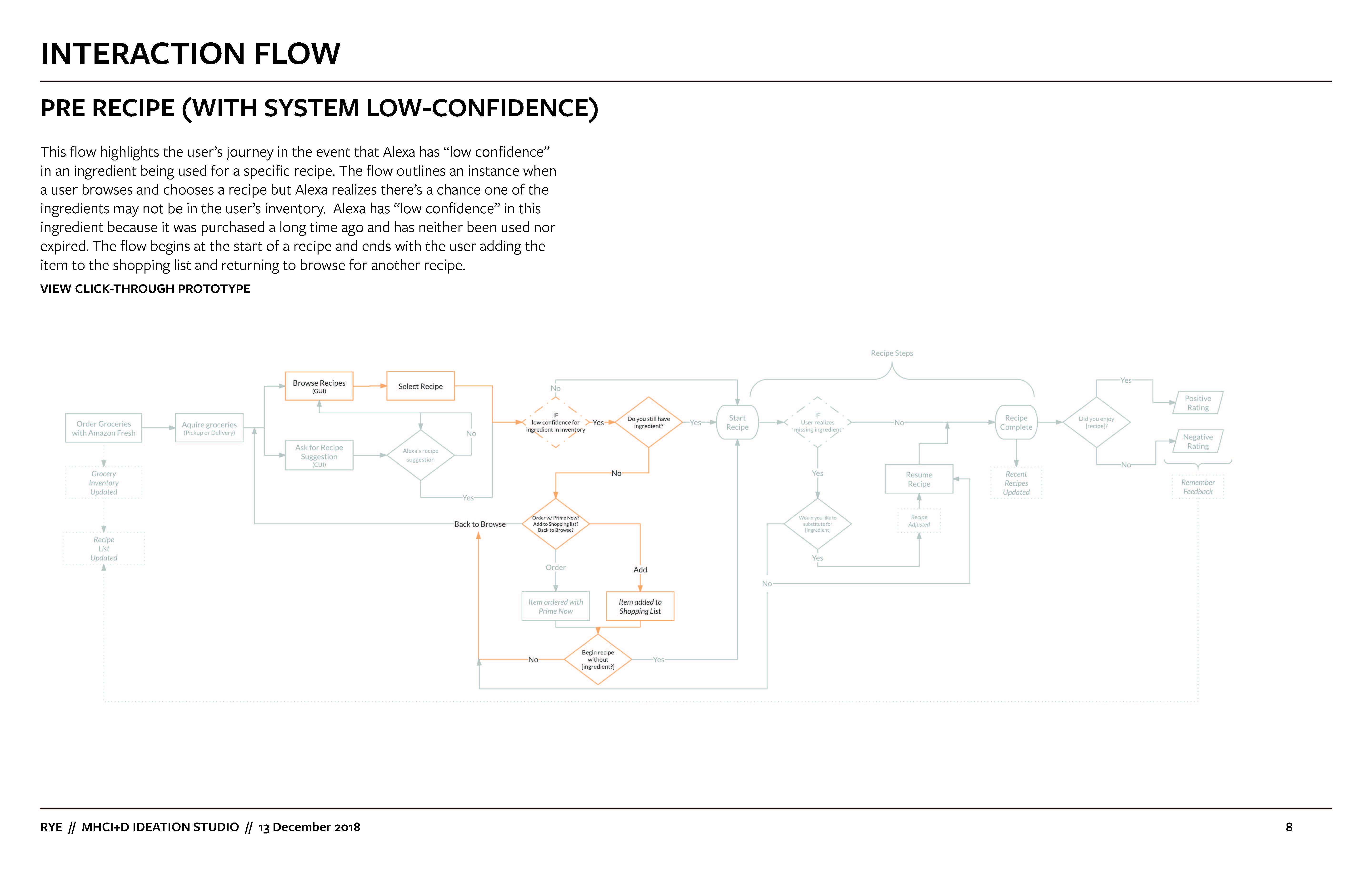 This flow outlines an instance when Alexa has “low confidence” in an ingredient because it was either purchased a long time ago, has not been used in awhile, or has expired. 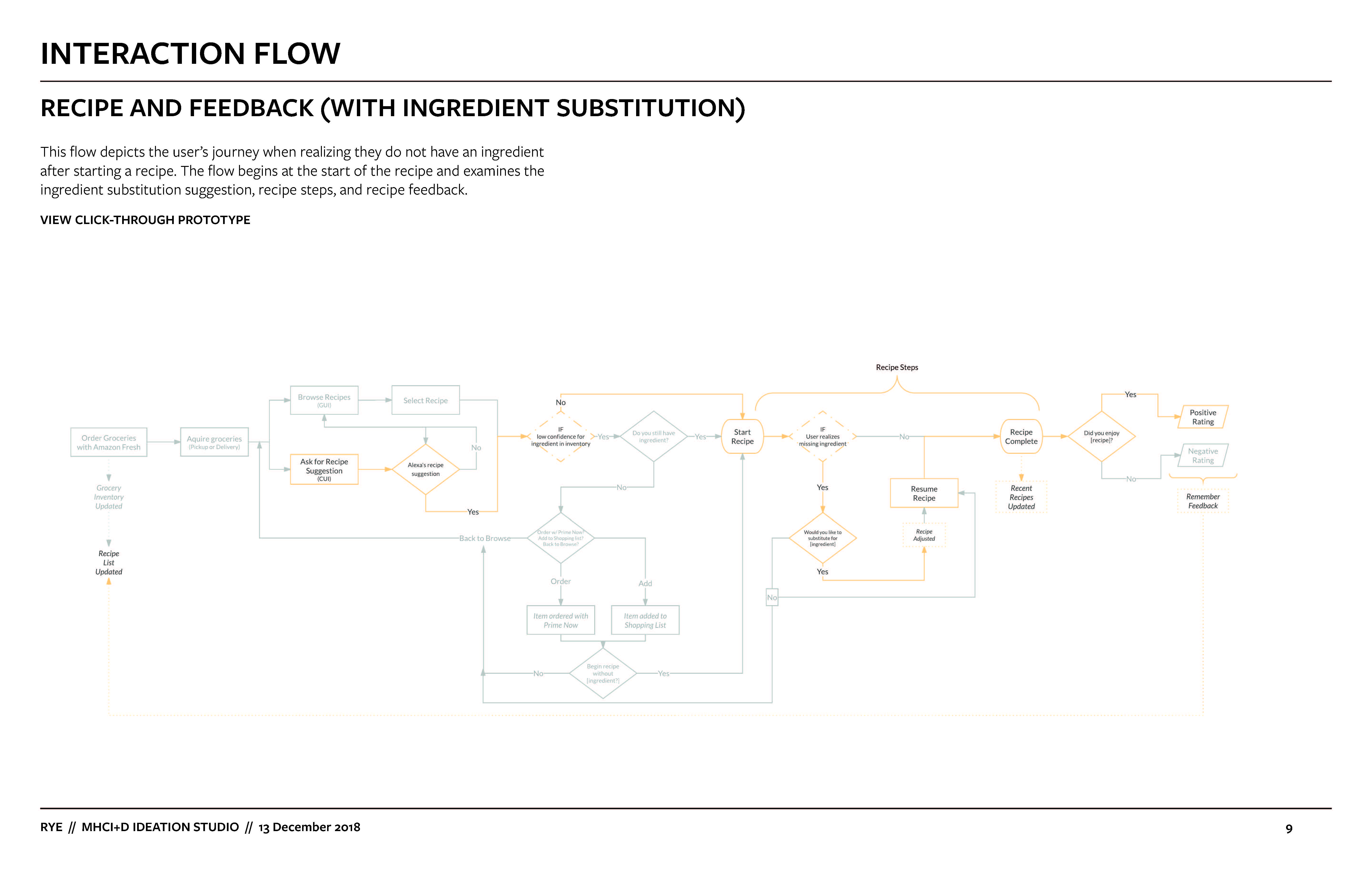 This flow shows a substitution recommendation if a person doesn't have the ingredient and they already started the recipe. It also outlines how a person would give recipe feedback.

We designed our Hi-Fi prototypes for the Echo Show and conducted a second round of usability testing. During this round, interviewees stressed the importance of seeing the ingredients for each recipe step. They also wanted the flexibility to see previous and future steps. We took their feedback into consideration and created the final design for Rye.

Recommended recipes based on current inventory

Recipes based on the first ingredient in your inventory that is about to expire.

An overview of the chosen recipe outlining ingredients needed as well as the steps involved.

Step-by-step instructions that highlight the ingredients used for that particular step. Also, allows people to see recipe progress as well as previous and next steps.

For future iterations of Rye, we would expand the experience beyond Amazon and include grocery purchases from other stores. During the creation of Rye, we toyed with the idea of tracking non-Amazon purchases through store rewards cards or credit cards. However, we need to further explore these tracking techniques as well as other methods to find an effective model.

One of the challenges that we faced is our lack of familiarity with the Echo Show. Initially, we read a lot about the Echo Show through the developer guide and secondary research. However, we did not fully understand the Echo Show's voice interactions or style guidelines until we interacted with one. When designing for an existing interface it is crucial to interact with the device early on in the design process because it can lead to better design decisions.
‍
Despite this challenge, we quickly learned about VUIs and prototyped a working model with limited resources. We also learned new software such as Adobe XD which gave us more flexibility in creating Hi-Fi prototypes of the Echo Show and SaySpring which allowed us to create multi-turn VUI interactions. Ultimately, our flexibility during the design process and eagerness to learn helped us create a successful concept.